Lilithmon is a Demon Lord Digimon whose name and design are derived from the mythological Lilith. One of the "Seven Great Demon Lords", it has the appearance of a woman and represents the Moon and the sin of Lust. It is thought that it was originally an Ophanimon, but it fell from heaven and eventually became known as the "Goddess of Darkness". It confounds its opponents with its bewitchingly lovely appearance, and it is said that those who are taken in by its temptations are invariably granted death. Its reputation as the "Goddess of Darkness" is appropriate, as it offers generosity towards vice, but only cruel outrages towards virtue. The demonic "Nazar Nail" on its right arm corrodes everything it touches.

As one of the Three Head Officers, Lilithmon oversees the progress of IceDevimon and Lucemon, and controls the powerful but mindless Daipenmon, Machinedramon, and Arkadimon.

Lilithmon first made her existence known to Xros Heart when they arrived at the Lake Zone area she was in the process of conquering, using a mirror

to manipulate Akari into stealing the Lake Zone Code Crown for her. However, the attempt results with her face scarred by Akari when her hold over the girl was severed. When she saw the blood, she "exploded" mentally and forced the fusion of IceDevimon and Daipenmon, controlling them to attack. Xros Heart, Burn!

It was later revealed that Lilithmon was behind the attack on the Sand Zone, which wiped out the Goddesses' Warriors save Baalmon. Learning the truth behind his sect's destruction, Baalmon tried to attack her, but Lilithmon attacks him first. Taiki, The Goddess's Warrior!

In Ultima, Lilithmon is a member of the 7 Demon Lord Digimon within the ranks of the Organization. She also serves as a secret lover to Padro Lodo, which raises the ire of both Lodo's wife and Maleficent, who believes Lilithmon to be nothing more but a mere imposter to the role as Mistress of All Evil. Later on, Lilithmon reveals herself to be the resurrected Mega Form of LadyDevimon, who once served as both Piedmon and Daemon's second-in-command.

Lilithmon by Fragment of the Moon 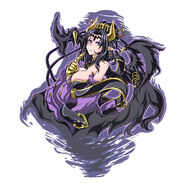 Lilithmon by @mino
Add a photo to this gallery
Retrieved from "https://nicktheultimaswordwielder.fandom.com/wiki/Lilithmon?oldid=39737"
Community content is available under CC-BY-SA unless otherwise noted.